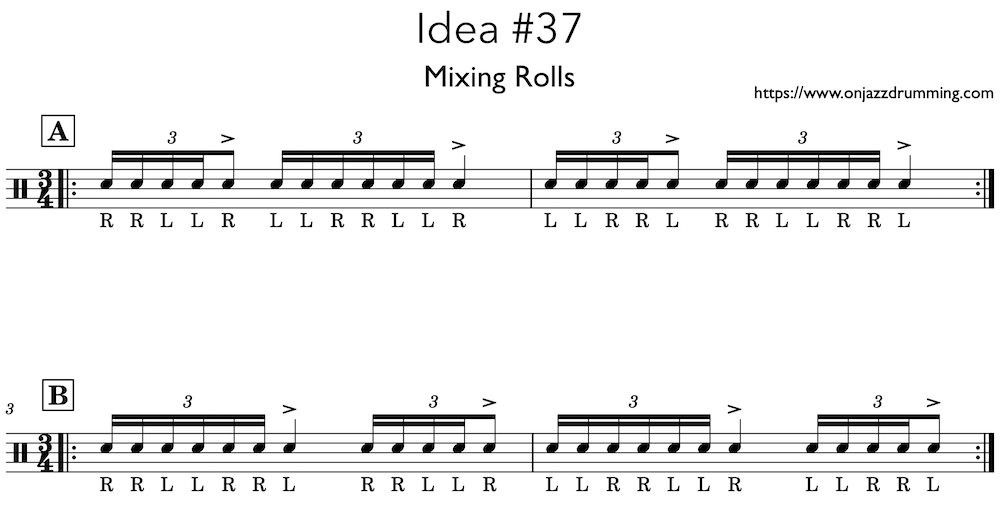 Unless you are playing an etude or solo, rolls are often practiced in isolation. This can be great for working on chops and can provide some useful vocabulary but you can start to expand your vocabulary and your fluidity by starting to combine rolls in different ways. With that in mind here are a few ideas.

The first exercise A, is a five-stroke roll followed by a seven-stroke roll, played as sixteenth-note triplets. The accent falls on the same upbeat-downbeat figure we have looked at previously.

Exercise B, is the same idea but shifted to a different placement in the bar. The remaining placement, with the downbeat accent on beat one, is in the PDF.

Instead of a five-stroke roll, you can extend it to a nine-stroke roll. This works quite well with exercises B and C (see PDF).

The exercise is written out with double strokes but I recommend also working it up with single strokes and with brushes.

Move the accents to different sound sources, and add the bass drum when you play the accent on the cymbals.

Once comfortable apply the idea over 4/4. You'll find some nice applications for fills and solos.

The PDF also contains an idea with 32nd notes in 4/4 playing a five-stroke roll, followed by a seven-stroke roll and then a nine-stroke roll. These three rolls can be combined in several different orders, giving you a nice challenge and helping to develop mental flexibility as well as wrist dexterity

Have fun with them. Create your own ideas and use them to make music.