One of the great things about jazz is its ability to inspire, blend with, and absorb other styles of music. In 1960s Brazil, musicians heavily influenced by jazz developed a new style of samba that both simplified the samba beat and added more syncopation. It was called Bossa Nova and the first recorded Bossa Nova song was "Chega de Saudade". Since then it has become a key part of Brazilian music and culture. Nowadays, playing Bossa Nova is a very common part of jazz performance too and an essential part of playing jazz drums.

To get you started, here are: 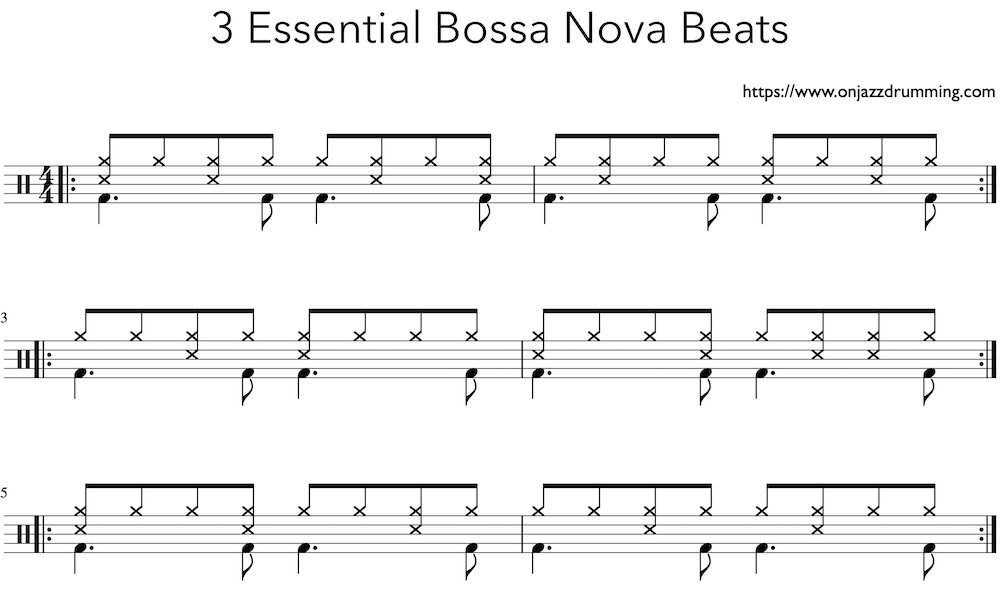 After you've got comfortable with the basic patterns, there are some other ways to play these grooves:

It should be noted that although Bossa Nova developed from and can be considered a style of Samba, Bossa Nova is not simply a Samba. One key difference is that Samba is felt and played in 2, whereas Bossa Nova is usually played in 4.

Another point is that, playing Bossa Nova is very similar to playing jazz, even in a more traditional setting. There is plenty of room for improvisation on the drum set especially with the comping patterns in the snare drum part. For an example of this see the transcription of Carlos Slon on Jobim's Captain Bacardi.

Here are five Bossa Nova tunes that you must be familiar with:

In terms of listening to Bossa Nova, a great place to start is "Getz/Gilberto" from 1964, with Stan Getz on Saxophone, Joao Gilberto on guitar and vocals, Antonio Carlos Jobim on piano, and Milton Banana on drums. I also recommend Oscar Peterson's "We Get Requests" for more jazz inflected versions of some of the familiar Bossa Nova standards.

Here's a video of Ali Jackson at Jazz at Lincoln Center playing a Bossa Nova on a cajon with brushes.