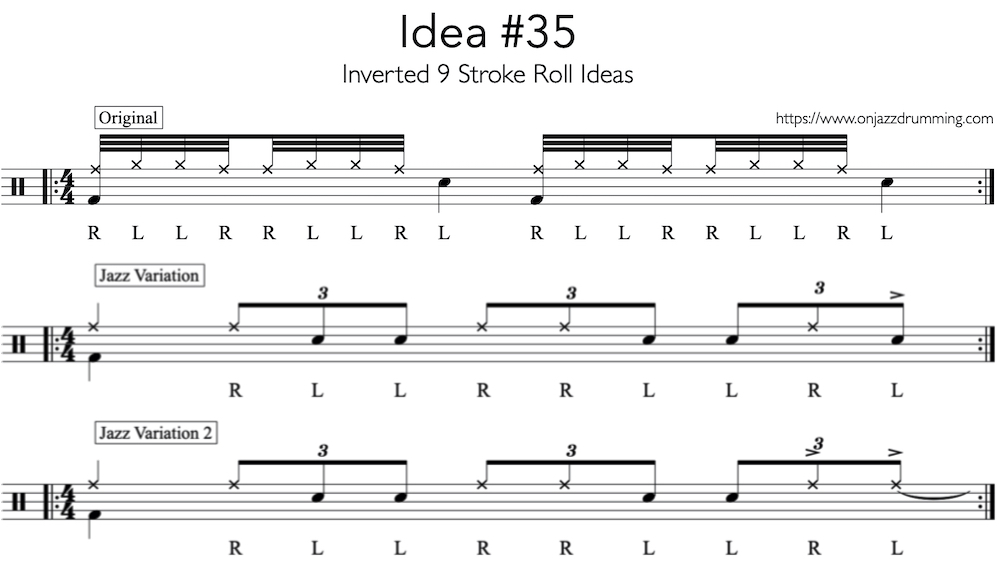 This is my interpretation of an inverted 9 stroke roll idea that I saw on Mike Johnson's instagram.

The original idea sounds really hip as fill between the ride and the hi-hat (or snare) for funk, rock, pop settings. After playing with it for a while and coming up with a few alternatives around the kit (see PDF), I wanted to apply it to jazz drumming in triplets and see what came out.

In the image above you can see the original idea, and then below that, two jazz triplet interpretations.

The first variation finishes with the 9-stroke accented on the snare.

The second variation puts the last beat of the 9-stroke on the cymbal. Although it's not notated above, adding the bass drum on that last note (or two notes) would give it some extra weight.

The third variation, shown in the PDF, reverses the sticking and starts the pattern on beat two with the LH. This comes our quite nicely on the "and" of four on the ride cymbal. I think this is the variation I find most useful.

The PDF contains several more ideas based on the this including playing the pattern between the bass drum and snare, and starting the figure with the snare drum / left hand, instead.

As an additional idea, you can try starting the figure on other beats of the bar. The obvious place to start would be playing it on beat one, coming out on the "and" of beat three, and tying over to beat one of the next bar.

Experiment, have fun and make it your own.

This was originally posted on "Jazz Drumming Blog". This post has been revised from the original.