11 Essential Jazz Drummers You Should Check Out

When you are starting out with jazz drumming one of the most important things you need to do is listen a lot. In fact this is true whether you are a beginner or not. In order to understand the rhythms, the feeling, the swing, you have to listen widely and historically. Time spent listening to the music and what the drummers do, is as valuable as practicing, and not listening enough was a mistake I certainly made when I was starting out. In fact, I still need to listen more which is part of the reason I wrote this post.

There are hundreds and hundreds of great jazz drummers out there to listen to, but what I want to give you here is a starting point, a minimum effective dose if you like, that will give you the arc of what jazz drumming is about and a rough sense of the stylistic developments in jazz drumming. There are a number of key jazz drummers who stand out as individuals and affected a change in the way jazz drums were played.

So, here are 11 essential jazz drummers you should listen to: 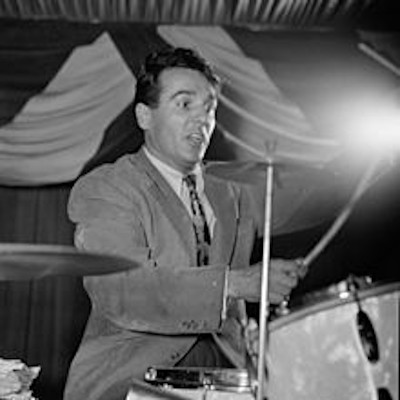 Gene Krupa was drumming's first superstar in the midst of the 1930s swing craze. He joined Benny Goodman’s Big Band in 1934, where he quickly became a major feature of the band as a soloist. In fact, it is Krupa that is responsible for making the drums a solo instrument and elevating the position of the drummer. Goodman’s band enjoyed enormous success, but Krupa also led his own successful big band and combos. His loud swinging style often featured solos with syncopated tom rhythms, as can be heard in the classic Goodman tune “Sing, Sing Sing”. Krupa adapted less well to be-bop, a style of jazz that didn’t suit his way of playing. However, he laid the foundations of jazz drumming and was a powerful influence and inspiration for drummers who came after him.

Kenny Clarke is considered by many to be the founder of be-bop drumming, laying the foundations for the drummers who came after him - particularly Max Roach and Art Blakey. His playing career was varied, from working in big-bands in the 1940s, to working with Charlie Parker and Dizzy Gillespie in the after-hours to develop be-bop, to playing with visiting American musicians, including Miles Davis, while living in Paris. He was one of the first drummers to really use syncopated snare drum and bass drum patterns to comment on and support soloists, and was given the nick name “Klook” after his signature sound that combined a rimshot accent followed by a bass drum. He was one of the main innovators of jazz cymbal time, and his cymbal time was so good it was called his “heartbeat” by other musicians.

Max Roach began his professional career with Coleman Hawkins, but established his reputation as the leading be-bop drummer playing extensively with Charlie Parker. He formed a short lived but highly acclaimed quintet with Clifford Brown, as well as led his own quartet. In addition to jazz drumming, he studied composition and classical percussion at the Manhattan School of Music. Along with Kenny Clarke, he is seen as one of the main innovators in playing jazz time, focusing the pulse in the cymbal and freeing the bass drum and snare to support soloists. While he could give virtuoso performances, he is often understated in his playing. His soloing is compositional in nature and he had a way of supporting soloists that encouraged them to explore the music further. 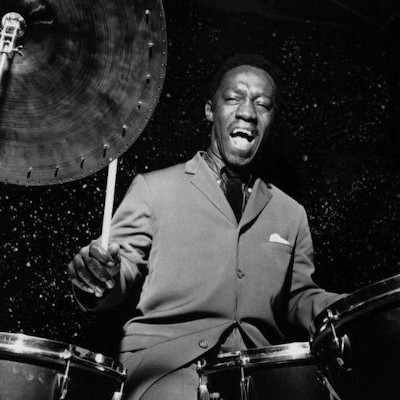 Art Blakey originally started as pianist before moving to the drums. Like Clarke, he played in big bands in the 1940s and then worked with be-bop musicians like Thelonius Monk, Charlie Parker and Dizzy Gillespie. He played on countless Blue Note dates with Miles Davis, Cannonball Adderley, Hank Mobley among many others. However, he is probably best known for developing the quintessential hard-bop sound with the Jazz Messengers, which was originally started with Horace Silver, but became Blakey’s trade mark band. His style combines some of the driving elements of swing with the more rhythmically complex be-bop. He is known for his snare rolls and solo playing, his polyrhythmic comping, and his jazz shuffle.

Records: Moanin - Art Blakey and the Jazz Messengers; A Night at Birdland.

Miles Davis reportedly called Philly Joe Jones his “favourite” drummer and it is for his work with Miles Davis that he is best known. He was part of Miles’ first classic quintet which included Paul Chambers on bass, Red Garland on Piano and John Coltrane on tenor, and performed on the classic records Round About Midnight and Milestones. His style was influenced by Art Blakey and Max Roach, and manages to combine elements of both their playing into something uniquely his own. He was very good at creative comping behind strong soloists like Coltrane. One thing he is particularly known for is the rim-click back beat regularly played on the 4th beat of the bar, as you can hear on the track Milestones.

Roy Haynes has had a wide ranging playing career, and is still going at 95. He started with Lester Young, played with many of the be-bops greats including Charlie Parker, was the regular drummer for Sarah Vaughan, played with Miles Davis, Thelonious Monk and John Coltrane, among others. He performed on Chick Corea’s first solo piano trio album, as well as in a trio Pat Metheny and Dave Holland. He is equally at home with swing, be-bop, fusion and avant-garde jazz. He has a very clear, crisp way of comping on the snare, creating polyrhythmic patterns with the bass drum, and a distinct, melodic way of playing the cymbal, all of which help to support, converse with and propel the soloist. He also noticeably uses the hi-hat as an additional voice in this playing. His soloing has a great way of using space for creating tension, and exploring sounds and dynamics on the kit.

Billy Higgins is perhaps not as well none as some other drummers, but he played on over 700 recordings, including some of the most famous tracks in jazz. He became well-known for his pioneering work in free jazz with Ornette Coleman at the end of the 1950s. After that, he worked and recorded with John Coltrane, Herbie Hancock, Lee Morgan, Thelonious Monk, Dexter Gordon, to name a few. He played on the original recordings of "Watermelon Man" and "The Sidewinder”, both of which incorporate elements of funk into a jazz groove. His playing is often subtle - he reportedly liked to play softly so he could hear the other musicians - but always creative. He was a flexible jazz drummer, very responsive to soloists and his cymbal time has a light, dancing quality to it.

Tune: The Sidewinder
Records: The Shape of Jazz to Come - Ornette Coleman; Takin’ Off - Herbie Hancock

“Kind of Blue” is considered by many to be the greatest jazz record of all time, as well as probably the best selling and there is no better place to start when studying jazz and jazz drumming. Jimmy Cobb, was of course, the drummer on “Kind of Blue”. He joined Miles Davis in 1958 and worked with him until 1963 also recording on Sketches of Spain. As well as playing with Miles he recorded with John Coltrane, Cannonball Adderley, Wes Montgomery among others, and also worked extensively with Sarah Vaughan. His drumming is uncomplicated, but his feel, phrasing and choice of accent placement to support a soloist are perfect. Especially if you are new to playing jazz drums, studying Jimmy Cobb is a great way to understanding the language of jazz drumming. 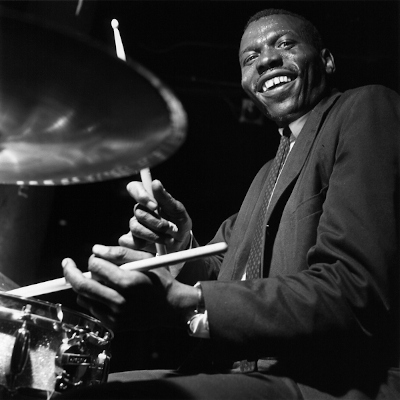 Elvin Jones made his recording debut in the early 1950s and moved to New York in 1955 where he worked with Miles Davis, Sonny Rollins, Bud Powell and many others. His enduring impact on jazz drumming stems mainly from his work with the classic John Coltrane quartet from the 1960s onward, as well as prolific contributions to other artists such as Wayne Shorter. Jones’s drumming undoubtedly helped propel Coltrane’s solos and musical explorations. His style can be seen as a development of the drumming of Max Roach and Art Blakey, further extending their cross-rhythms and polyrhythms around the kit through an amazing independence. His playing is full of intense energy and has a constant forward motion that uses a lot of triplet subdivisions and displacements. He also incorporated rhythmic elements from Latin and African music into his playing.

Tune: All or Nothing At All
Records: Love Supreme - John Coltrane; Puttin’ It Together - Elvin Jones Trio.

Anthony, Tony, Williams was probably one of the most influential and innovative drummers, pushing drumming into new realms. He started young and after playing and studying in Boston, moved to New York where he joined Miles Davis second great quintet at the age of seventeen. After playing with Miles for six years, he started his jazz rock group Lifetime which pioneered jazz fusion. His drumming is extremely intricate, layered and complex. He plays with an almost unlimited freedom on the kit, displacing accents, subdividing the beat, using metric-modulations, superimposing one time on another, not to mention dexterity and speed. He essentially created a lot of new rhythmic vocabulary and possibilities for the drums that is still being studied, imitated and developed by drummers fifty years later. 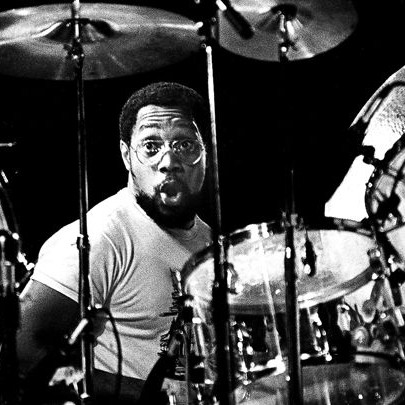 Billy Cobham first started to gain attention as a drummer, when he played with the Horace Silver Quintet in 1968. He worked as a session musician before forming a jazz-rock group with Micheal and Randy Breaker. Around the same time he worked with Miles Davis on several records including the experimental Bitches Brew. However, it is largely for his work with legendary jazz-fusion group, the Mahavishu Orchestra, of which he was a founding member with guitarist John McLaughlin, that he is best known. The group’s blend of jazz, rock and even Indian music, was highly innovative and very influential, and was made possible by Cobham’s drumming. His powerful, musical and rhythmically complex playing opened new doors on the drum kit and set a new bar for jazz drumming, especially in fusion music.

While far from exhaustive this list of jazz drummers gives you an overview of the historical and stylistic changes in jazz and jazz drumming. This is just a place to start from, you will find many more records and many more jazz drummers to listen to as you explore this music further. Happy listening.